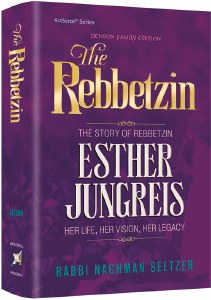 The Rebbetzin [Hardcover]
The Story of Rebbetzin Esther Jungreis Her Life, Her Vision, Her Legacy
By: Rabbi Nachman Seltzer

Product Description
Esther Jungreis was a young Holocaust survivor who became a friend, advisor, confidante, Torah teacher and often even a surrogate mother to thousands: singles and families, prime ministers, presidents and prisoners, and soldiers and spiritual seekers throughout the world.
A pioneer in Jewish outreach and the founder of Hineni, she made history in Madison Square Garden, where she proved that Torah could interest, engage, and energize all Jews.
Through her newspaper columns, television programs, bestselling books, and standing-room-only speeches, she ignited the pintele Yid that lies within every Jew.
She shared her passion for Torah and Jewish continuity and enriched the lives of millions throughout the world.
She was "The Rebbetzin" -- Rebbetzin Esther Jungreis - and this is her unforgettable and inspiring story.

Born in Szeged, Hungary, Esther Jungreis descended from a great rabbinic dynasty that traced its lineage back to the days of King David. Having survived the Holocaust, she and her husband, Rabbi Meshulem Jungreis, were determined to devote their lives to combatting the spiritual holocaust of assimilation. Her life was infused with a giant spirit, and a fierce love for every Jew. She brought to Jews the world over a rare and wonderful combination: the warmth and caring of a Jewish mother (she made literally hundreds of shidduchim!), combined with the excitement and inspiration that only a truly gifted and dynamic teacher can share.

The Rebbetzin was written by Rabbi Nachman Seltzer, one of the Jewish world’s premiere authors, who interviewed close to one hundred people family, shul members, students, neighbors, and many others whose souls she touched, who shared her devotion to Klal Yisrael. In these stories he vividly captures the life of one of the twentieth century's most fascinating, charismatic and spiritually inspiring Jewish personalities.

The Rebbetzin is an absorbing and fascinating book to read. But more: it guides us to look to the future with a renewed sense of commitment, and to build upon the Rebbetzin's accomplishments and perpetuate her inspiring legacy.

A Blaze in the Darkening Gloom Rav Meir Shapiro [Hardcover]

A Blazing Light in the Darkness [Hardcover]

A Gadol in Our Midst [Hardcover]

A Gadol in Our Time [Hardcover]

A Look Back - Hardcover

A Look Back - Paperback

A Sister in White [Hardcover]

A Tzaddik for Eternity [Hardcover] 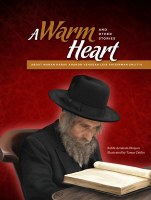 All For The Boss [Hardcover]

All for the Boss [Hardcover]

An Angel from Yerushalayim [Hardcover]

And The Angels Laughed - Hardcover

As Long as I Live [Hardcover]

At His Rebbi's Side [Hardcover]